In France, the main Christmas meal is a gracious and arranged affair held on Christmas Eve. The meal is a splendid feast of the finest foods accompanied by great wines and will stretch on until after midnight.

According to the French Ministry of Europe and Foreign Affairs: Many of today’s Christmas traditions originated in the Middle East and were introduced to France by the Romans. Reims was the site of the first French Christmas celebration when (in 508) Clovis and his 3,000 warriors were baptized on Christmas Day.

Charlemagne received the crown from the hands of Pope Leo III on Christmas Day in 800. In 1100, Godefroy de Bouillon’s successor, his brother Baudouin, was crowned in the basilica of Saint Mary of Bethlehem. Later, King Jean-le-Bon founded the Order of the Star in honor of the manger; it remained in existence until 1352. In 1389, French crowds shouted Noël! Noël! in welcoming Queen Isabeau of Bavaria to the capital.

The first tree in France was said to have been presented as ‘the holy tree of Christmas’ in the city of Strasbourg in 1605. It was decorated with artificial colored roses, apples, sugar, and painted hosts, and symbolized the apple tree in the garden of Eden.

Another custom is that of the nativity scene and the manger, (la crèche) which are believed to have originated in the 12th century, in the form of liturgical drama. The popular manger was introduced in Avignon by Saint Francis of Assisi between 1316 and 1334, and after the revolution, it was popular to display a crèche or ‘nativity’ in homes for Christmas.

Christmas fairs are a popular and colorful tradition in France and the most famous Christmas market in Europe is held annually in Strasbourg, the capital of Alsace, and dates back to 1570. For five weeks this historic city on the border of France and Germany becomes the “Christmas capital of Europe” and turns into one giant magical decoration.

The history of the Fair actually began in the 14th century when it was called St. Nicholas Fair. In 1570, under pressure from the Reformation, the name of the Catholic saint was replaced with the name of the Christ child. Since then, the Fair has been called Christkindelsmärik.

The twelve squares of Strasbourg host hundreds of festively decorated wooden chalets. Souvenirs and local delicacies, Christmas decorations, handicrafts, and other festive utensils are all sold here and it is a wonderful opportunity to taste traditional Alsatian cuisine, much of it cooked right there in the streets.

Twelve Christmas markets are open all across the city: Christkindelsmärik itself on Broglie Square and other Christmas markets on the Cathedral, Castle, and Crow squares. The Gutenberg Square hosts a Swiss village; the Station Square is an arts and crafts market. All the streets hold small themed artisanal fairs. The Kleber square is very festive thanks to its elegantly decorated fir tree brought straight from the mountains. Every year a particular country is invited to be an honorary guest at the Strasbourg Fair. Craftsmen, chefs, and winemakers thus introduce the visitors to the customs of their country. A special cultural program includes film projections, dancing, and folk music performances.

Before the 18th century, le réveillon de Noël was divided into two meals: people ate a light supper before midnight Christmas Mass, and then indulged in a “fat” supper at 3 am that would last for hours.

Réveillon, as the name suggests is a decadent affair, and the finest dishes and wines will be served: after an aperitivo of Champagne friends and family will enjoy oysters, smoked salmon, lobster, foie gras, and possibly caviar all accompanied by an appropriate white wine, perhaps a Chablis Grand Cru.

For soup, there’s velouté de châtaignes, a creamy chestnut soup made with winter vegetables, whose name means “velvet.” This will be followed by the traditional Christmas Turkey, with chestnuts and a superb stuffing and a cured, Christmas ham may also be served. Of course, there will be a glorious selection of cheese and the option of salads.

It’s not a true Réveillon without a visually stunning and delicious Yule log and Marrons glacés, (candied chestnuts), macarons, Pain d’épices, or gingerbread may also find its way onto the table. 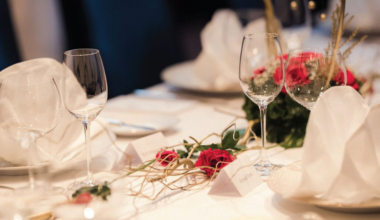